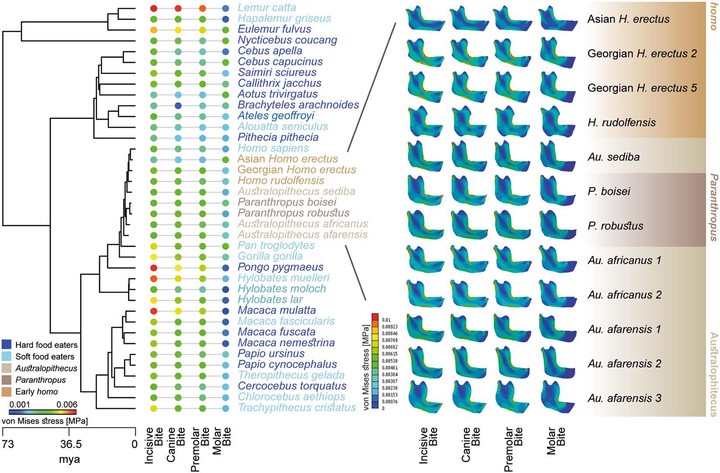 An on-going debate concerning the dietary adaptations of archaic hominins and early Homo has been fuelled by contradictory inferences obtained using different methodologies. This work presents an extensive comparative sample of 30 extant primate species that was assembled to perform a morpho-functional comparison of these taxa with 12 models corresponding to eight fossil hominin species. Finite Element Analysis and Geometric Morphometrics were employed to analyse chewing biomechanics and mandible morphology to, firstly, establish the variation of this clade, secondly, relate stress and shape variables, and finally, to classify fossil individuals into broad ingesta related hardness categories using a support vector machine algorithm. Our results suggest that some hominins previously assigned as hard food consumers (e.g. the members of the Paranthropus clade) in fact seem to rely more strongly on soft foods, which is consistent with most recent studies using either microwear or stable isotope analyses. By analysing morphometric and stress results in the context of the comparative framework, we conclude that in the hominin clade there were probably no hard-food specialists. Nonetheless, the biomechanical ability to comminute harder items, if required as fallback option, adds to their strategy of increased flexibility.