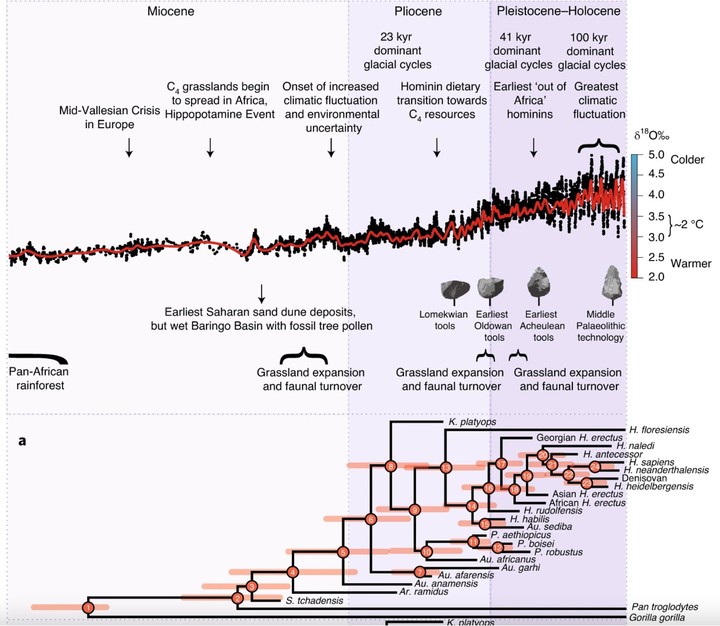 My main academic interest relates to the study of how and why human and primate bodies have become the way they currently are. My research has focused on the morphological innovation along the human lineage, primate phylogenetics and adaptive evolution, palaeontological fieldwork in the Rift valley, and the development of new statistical and computational tools to analyse primate form and function in an evolutionary framework. This work can be further divided into the following topics:

• Hominin phenotypic evolution: My present work at the University of Reading focuses on identifying major shifts in hominin phenotypic evolution (e.g., brain expansion, bipedalism), and to determine whether these shifts are synchronous with key environmental changes. To do this we have been collecting the largest hominin dataset at the specimen level ever compiled. I am exploring this topic by analysing different anatomical traits, a sample of new hominin phylogenies that I recently inferred, and a phylogenetic comparative framework developed to test the role of climate and geography on hominin evolution.

• The evolution of the ape and human hands: Inferring the locomotor behaviour of the last common ancestor (LCA) of African apes and humans is still a divisive subject. An African great-ape-like ancestor using knuckle-walking is the most parsimonious hypothesis for the LCA, despite diverse conflicting lines of evidence. Using morphometrics, computational biomechanics, and phylogenetic comparative methods, my colleagues and I have been working in modelling the evolution of human and ape hand morphology. This is fundamental to understand the origins of the modern human hand and its precision grip capabilities, tool use, and the locomotor repertoire of the LCA.

• Mandibular ecomorphology: Diet is regarded as one of the main factors underlying the behavioural and ecological differences among living primates, and consequently primate diets have been more exhaustively documented than any other aspect of their behaviour. A substantial proportion of physiological and anatomical adaptations have as their fundamental objective the transformation of the food that animals consume. Many studies have focused on the mandibular adaptations because the lower jaw is mostly involved in food consumption, and hence it would be expected that its morphology better reflects diet adaptations.This relationship between primate mandibular form and diet has been previously analysed by applying a wide array of techniques and approaches. Nonetheless, most of these studies compared few species and/or infrequently aimed to elucidate function based on an explicit biomechanical framework. Therefore, my colleagues and I have been working to better understand this relationship using computational biomechanics and morphometrics. This is relevant not only to understand ecomorphological adaptations in extant species but also to carry out dietary reconstructions in fossil taxa.