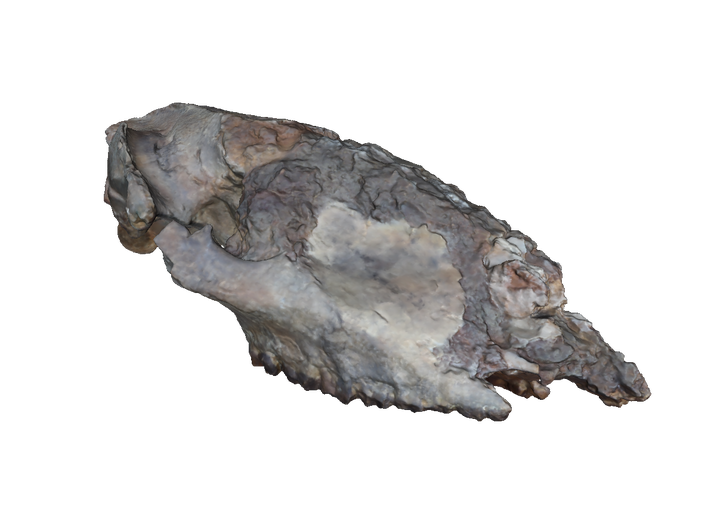 3D model of an Afrohyrax cranium from Kenya. Image credit: Thomas A. Püschel

Much of our understanding of vertebrate evolution and human origins in the late Cenozoic of Africa derives from Miocene and Pliocene fossil localities distributed along the East African Rift System (EARS). In particular, the Miocene is a fascinating time period that compared with the epochs that followed, it is outstandingly long. It lasted from about 23 million to 5 million years ago, which logically means that the world changed far more over this time period than it did during the following epochs. Interestingly, most of the mammal species that were alive during the Miocene are at least roughly classifiable to modern mammalian groups. However, it is also important to keep in mind that it was also an of epoch characterised by change, with many older forms of mammal still surviving, only to die out before the Miocene’s end.

Climatic and environmental factors are strong drivers of evolution, and it is expected that these processes played a central role in these evolutionary changes observed during this epoch. Consequently, several hypotheses have been advanced to relate climate and environmental fluctuations with important events in the evolution of different mammalian lineages. However, many of these hypotheses are limited by the biogeographic gap dividing South and East African paleontological sites located in the EARS. Even though this area has crucially contributed to our understanding of vertebrate and human evolution in the late Cenozoic of Africa, the distribution of fossil sites along the rift is extremely biased towards its northern areas, and the types of palaeoenvironments are predominantly circumscribed to fluvial and lacustrine locations. Fortunately, the situation is now changing as a consequence of the finding of several fossiliferous sites located within Gorongosa National Park, Mozambique at the southernmost point of the EARS. Fossils from these sites comprise dicot trees, palms, invertebrates, reptiles, fishes, invertebrates, and mammals. Mammals are more abundant than other vertebrates, even though most specimens are fragmentary postcranial elements, as well as dental elements. This emerging fossil record, as well as the sedimentological reconstruction of this location, suggest a palaeoenvironmental mosaic of estuarine-riverine forest/woodland systems, thus representing the first coastal Miocene habitat identified in the EARS. This unique setting can allow us to assess currently untested hypotheses such as those that predict that hominoids originated in coastal forest settings, as well as those proposing that deltaic components were fundamental during human evolution. The emerging mammalian record from these areas can certainly provide fundamental information about the interaction of environmental change and mammalian evolution, including processes that likely affected hominin evolution. Fossil mammals represent a unique source of information about the Earth’s past, since individual species and entire assemblages can expose the distinctive characteristics of the mammalian community in a given place and time, thus playing a fundamental role in our understanding of how lifeforms evolved in different settings over geological time. During the 2019 field season in Gorongosa, more than 400 fossils were found. Therefore, I am currently describing and identifying these new fossil findings, as well as comparing them with Miocene fossil materials from other African regions.

I am a palaeoprimatologist and vertebrate palaeobiologist mainly focused on primate and mammalian evolution. My main interest is to study organismal evolution by reconstructing and comparing the palaeobiology of fossils to their living ecological relatives. In order to do this, I apply a combination of predictive modelling, 3D morphometrics, virtual biomechanical techniques, computational simulations, phylogenetic comparative methods, and fieldwork. I am currently collaborating on a diversity of projects that can be placed in the interface between biological anthropology, palaeontology, ecology and evolutionary biology, using cutting-edge informatic techniques. My Leverhulme Project has taken me to Gorongosa National Park, Mozambique, where I work together with the Paleo-Primate Project Gorongosa.