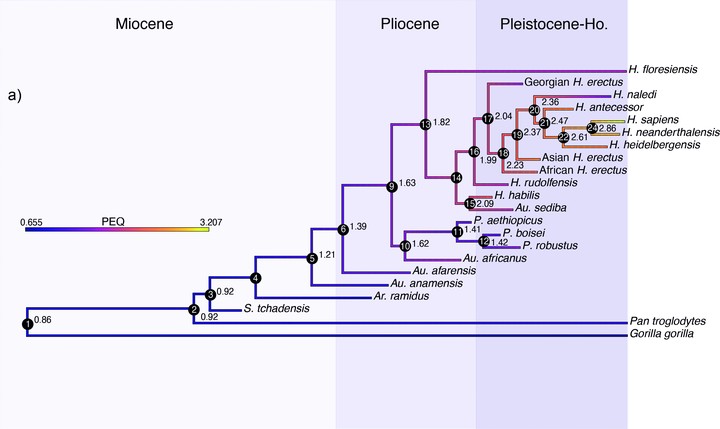 Quantifying speciation times during human evolution is fundamental as it provides a timescale to test for the correlation between key evolutionary transitions and extrinsic factors such as climatic or environmental change. Here, we applied a total evidence dating approach to a hominin phylogeny to estimate divergence times under different topological hypotheses. The time-scaled phylogenies were subsequently used to perform ancestral state reconstructions of body mass and phylogenetic encephalization quotient (PEQ). Our divergence-time estimates are consistent with other recent studies that analysed extant species. We show that the origin of the genus Homo probably occurred between 4.30 and 2.56 million years ago. The ancestral state reconstructions show a general trend towards a smaller body mass before the emergence of Homo, followed by a trend towards a greater body mass. PEQ estimations display a general trend of gradual but accelerating encephalization evolution. The obtained results provide a rigorous temporal framework for human evolution.