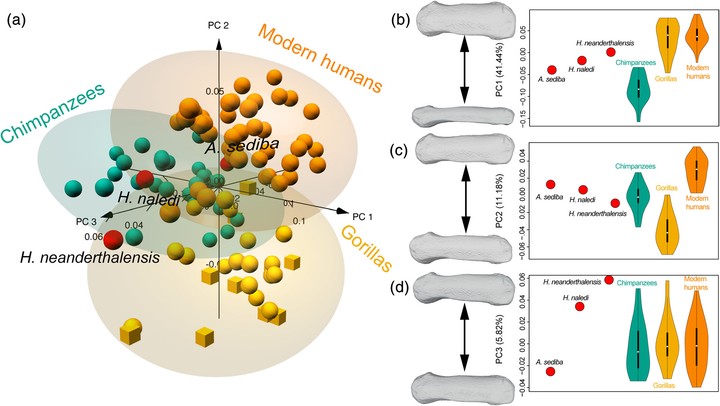 The morphological characteristics of the thumb are of particular interest due to its fundamental role in enhanced manipulation. Despite its possible importance regarding this issue, the body of the first metacarcapal (MC1) has not been fully characterized using morphometrics. This could provide further insights into its anatomy, as well as its relationship with manipulative capabilities. Hence, this study quantifies the shape of the MC1’s body in the extant Homininae and some fossil hominins to provide a better characterization of its morphology. The sample includes MC1s of modern humans (n = 42), gorillas (n = 27), and chimpanzees (n = 30), as well as Homo neanderthalensis, Homo naledi, and Australopithecus sediba. 3D geometric morphometrics were used to quantify the shape of MC1’s body. The results show a clear distinction among the three extant genera. H. neanderthalensis mostly falls within the modern human range of variation. H. naledi varies slightly from modern humans, although also showing some unique trait combination, whereas A. sediba varies to an even greater extent. When classified using a discriminant analysis, the three fossils are categorized within the Homo group. The modern human MC1 is characterized by a distinct suite of traits, not present to the same extent in the great apes, that are consistent with an ability to use forceful precision grip. This morphology was also found to align very closely with that of H. neanderthalensis. H. naledi shows a number of human-like adaptations, while A. sediba presents a mix of both derived and more primitive traits.

I am a palaeoprimatologist and vertebrate palaeobiologist mainly focused on human, primate and mammalian evolution. My main interest is to study organismal evolution by reconstructing and comparing the palaeobiology of fossils to their living ecological relatives. In order to do this, I apply a combination of 3D morphometrics, virtual biomechanical techniques, computational simulations, statistical modelling, phylogenetic comparative methods, and fieldwork. I have recently joined the Venditti group, University of Reading, within the framework of the Leverhulme project ‘The evolutionary and biogeographical routes to hominin diversity’. I am also a research affiliate at the Institute of Human Sciences, University of Oxford, where I work together with the Paleo-Primate Project Gorongosa, Mozambique.