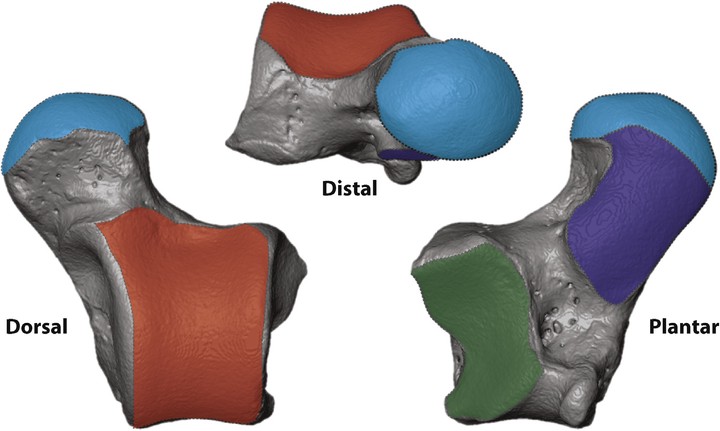 Platyrrhines are a diverse group of primates that presently occupy a broad range of tropical-equatorial environments in the Americas. However, most of the fossil platyrrhine species of the early Miocene have been found at middle and high latitudes. Although the fossil record of New World monkeys has improved considerably over the past several years, it is still difficult to trace the origin of major modern clades. One of the most commonly preserved anatomical structures of early platyrrhines is the talus. This work provides an analysis of the phenetic affinities of extant platyrrhine tali and their Miocene counterparts through geometric morphometrics and a series of phylogenetic comparative analyses. Geometric morphometrics was used to quantify talar shape affinities, while locomotor mode percentages (LMPs) were used to test if talar shape is associated with locomotion. Comparative analyses were used to test if there was convergence in talar morphology, as well as different models that could explain the evolution of talar shape and size in platyrrhines. Body mass predictions for the fossil sample were also computed using the available articular surfaces. The results showed that most analyzed fossils exhibit a generalized morphology that is similar to some ‘generalist’ modern species. It was found that talar shape covaries with LMPs, thus allowing the inference of locomotion from talar morphology. The results further suggest that talar shape diversification can be explained by invoking a model of shifts in adaptive peak to three optima representing a phylogenetic hypothesis in which each platyrrhine family occupied a separate adaptive peak. The analyses indicate that platyrrhine talar centroid size diversification was characterized by an early differentiation related to a multidimensional niche model. Finally, the ancestral platyrrhine condition was reconstructed as a medium-sized, generalized, arboreal, quadruped.